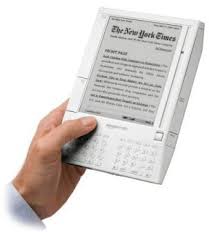 Apple’s iPad may have struck fear in the hearts of e-book makers when it launched three months ago, but the e-book market continues to grow. This week, Amazon revealed strong sales for its Kindle device during its earnings call. And Amazon’s price performance with the Kindle and its e-books could be enough to continue that growth.

The iPad has been a huge success, selling about 3.3 million iPads in the gadget’s first three months on the
market. In that time, 100 million apps have been downloaded. Also, 250,000 e-books were downloaded.

But the Kindle isn’t doing too bad either. After second quarter earnings came out this week, Amazon CEO Jeff Bezos said the Kindle and mobile content is an area of the
company defined by “rapid growth,” and he’s excited about what he defines as a “new category” of wireless tablet computers.”

Amazon’s stock did not perform well after its earnings announcement this
week, but there’s plenty of good news coming from the e-book division.

In hard sales numbers, Amazon customers spent over
billion via mobile device in the last year, including sales by
Kindle. During the company’s second quarter earnings release this week, CEO Jeff Bezos said that
tablets “over time” could “become a meaningful additional driver for our
business.”

The Kindle might be an exclusive reading tool, but Amazon was wisely branched out Kindle features. Most importantly, the company now allows users to access its ebooks on mulitple mobile platforms, including the iPhone and Android phones.

Kindle is also providing price performance. Titles on Amazon are slightly cheaper than those in the iTunes store. And just this summer, the Kindle price dropped from 9 to 9.

Kindle may now be in the early stages of a price war. Barnes and Noble’s Nook e-reader costs 9. The iPad costs 9, meaning that consumers really focused on reading might be attracted to the cheaper product that does that one thing well.

This could all be changed by a shift in technology or the digital reading experience. For now, dedicated e-readers have a jump on devices like the iPad because they are better at creating a reading friendly environment. For example, the iPad recently was criticized as a bad product for reading in bed.

But Amazon could have even more success by making the Kindle more affordable and opening up the e-book market to a wider demographic of readers. For Amazon, selling books is a big business. If getting a Kindle in the hands of consumers means they become dedicated Amazon e-book customers, it could be worth a little subsidy in the long run.